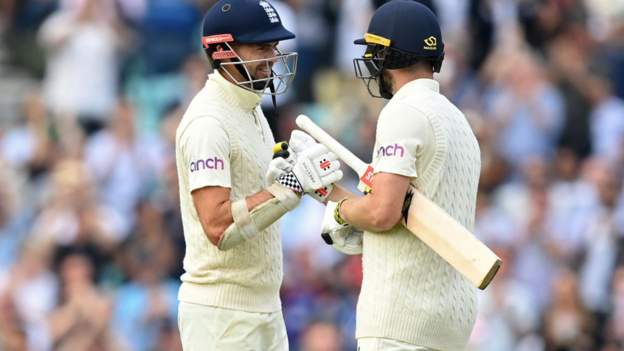 Ollie Pope struck 81 and Chris Woakes 50 but England’s fourth Test against India remains tantalisingly poised after a see-saw second day at The Oval.

Pope, returning after missing the first three Tests, added 89 with Jonny Bairstow, who made 37, and shared 71 with Moeen Ali, whose contribution was 35.

Woakes, himself back in the side after more than a year away, followed his 4-55 on day one by crashing 45 for the last wicket with James Anderson to take England to 290 all out.

India were left with just over an hour to bat, Rohit Sharma and KL Rahul taking the tourists to 43-0 and cutting the deficit to 56.

Rohit could have been caught by Rory Burns, but he failed to pick up an edge off Anderson and did not get a hand to the chance.

Both sides will enter the weekend knowing they have an opportunity to go 2-1 up with one Test left to play.

Test and series hang in balance

This superb series continues to hang in the balance following another arm-wrestle of a day when neither side could make a decisive move.

By reducing England to 62-5 from their overnight 53-3, India may have harboured hopes of a first-innings lead, only for Pope to keep them at bay.

England’s bid for complete control was hampered by some poor strokes – Moeen played a wild hack just as India were looking demoralised – then, with their lead at only 64 when the ninth wicket fell, Woakes reversed the momentum again.

The weight of history is against India. Not since 1902 has a team overturned such a large deficit to win a Test on this ground.

However, the pitch looks ideal for batting – there was much less assistance for the bowlers than England enjoyed when they dismissed India for 191 on day one.

Amid the fascinating cricket was one moment of stupidity. A man who entered the field of play during the second and third Tests did so again here and was arrested on suspicion of assault after colliding with England batsman Bairstow.

England selections do it again

England have recalled Haseeb Hameed, Dawid Malan and Craig Overton in this series and each played a part in the win at Headingley. Now Pope and Woakes have marked their returns with key contributions.

Pope, in his 20th Test, had never before played on his home ground of The Oval, where he averages just under 100 in first-class cricket.

Arriving in the second over of the day and, with England soon in trouble, he counter-attacked with Bairstow, playing silky drives and crisp clips. Later, he settled into a pattern of calm accumulation.

Pope passed 50 for the first time in nine Tests and seemed primed for a second hundred, only to drag on off Shardul Thakur. After Ollie Robinson was bowled recklessly swiping at Ravindra Jadeja, Woakes had just Anderson for company.

When Anderson arrived, Woakes had 18, but he swiped through the off side and muscled through the leg side for 11 fours in a 58-ball half-century.

Woakes was run out trying to pinch a run to the wicketkeeper that would have allowed him to keep the strike, ending a riotous last-wicket stand where England scored at quicker than a run a ball.

India could have been out of the game when they were reduced to 123-7 on day one, but since then have battled to still have a chance of going ahead in the series.

Pace bowlers Umesh Yadav and Jasprit Bumrah were excellent in the early morning, yet there were times when England were batting comfortably in the afternoon that it would surely have been beneficial to be able to call upon omitted off-spinner Ravichandran Ashwin.

Moeen might have been lbw to Bumrah on 14, only for no one to appeal, while captain Virat Kohli had a fit of petulance when the umpires were asked to change the ball just before tea.

Still, through their own persistence and some wickets gifted by England, India began their second innings knowing a total in excess of 300 could put the hosts under severe pressure.

They were boosted when second slip Burns failed to see Rohit’s edge off Anderson. Burns barely reacted as the ball flew past his shin for England’s fifth missed chance of the match.

And, by the end of the day, India’s serene progress meant it was England who were more grateful for the opportunity to regroup.

Former England captain Michael Vaughan: “If you go back to yesterday, 13 wickets fell. Today there has only been seven and that tells you the pitch is getting better.

“It will be a good day for batting tomorrow. You have to fancy this India batting line-up to play to the standard we know they can play.

“The pitch will tell you that you should bat all day tomorrow. They will probably score at just over three an over, so there will be 250 runs on offer. That would give them a 200-run lead going into day four, which would make this game very interesting indeed.”