‘Mood shifts with World Cup destiny in Scotland’s own hands’

It’s amazing how a win can change the emphasis, how the sight of a table with Scotland sitting pretty in second place and with their destiny in their own hands can lift the mood.

So, instead of saying Lyndon Dykes ranks 218th for attempts on goal in this World Cup qualifying campaign, we can now say he has scored the same number of goals as Timo Werner and Ciro Immobile and one more than Anthony Martial and Federico Chiesa.

Instead of saying Scotland have scored only nine goals from 68 attempts in Group F we can look at it like this – John McGinn has the same number of goals as Cristiano Ronaldo.

The heartening victory in Vienna, secured with a mature, intense and deeply impressive performance, has given us the chance to look at things in a different light.

Not enough clinical finishing? Yeah, true, but in terms of minutes on the pitch and goals delivered in qualifying, Ryan Fraser – not first choice for Newcastle – is outdoing Raheem Sterling of Manchester City and England, Ferran Torres of Manchester City and Spain, Mikkel Damsgaard of Sampdoria and Denmark, Serge Gnabry of Bayern Munich and Germany and assorted other stellar names from the European football terrain. He’s not that far off Ronaldo either.

From somewhere, Scotland found the kind of display many thought them capable of even if we were beginning to second-guess ourselves on that. They defended excellently for the most part, looked dangerous in attack, worked like troopers all around the pitch and slowly but surely ground down Austria with the persistence of a fighter landing damaging body shots.

They took the wind out of the home side. Billy Gilmour and Callum McGregor were influential. McGinn was a constant force. As a 90-minute victory in a game that truly mattered it was probably better than anything we have seen from Scotland in close to 15 years.

‘Neutrals would have seen Scotland in control’

The split personality of this Austria team was hard to get an angle on. Hammered 4-0 by the Danes in March, then victorious against North Macedonia and Ukraine and ultra-competitive against the Italians at the Euros, then obliterated 5-2 by Israel – their form line was all over the shop.

They had eight of the players that started against Italy in that last-16 match at the Euros, a team good enough to give the eventual champions a mighty scare. One of the big questions of the night was whether the five-goal humiliation against Israel on Saturday would demoralise Scotland’s hosts or force them into a tumultuous response.

Austria threatened early on, but only briefly. They flung in cross after cross in the belief that Scotland’s vulnerability in the air against Denmark could be exploited again. Once they realised the visitors were dominant in the aerial battle, they ran out of ideas and belief.

To some Scots watching on, it would have come across as a nervy night given Austria had so much of the ball, but that was largely because of an emotional involvement in what was going on.

A neutral would have watched through different eyes and would have seen a Scotland side that was comfortable in defence – apart for the moment Craig Gordon made his one save of the night – as well as being a threat on the counter.

Not much comes easy for Scotland, but against this calibre of opposition, this was as controlled as it has been for an awfully long time in a match of this importance.

And it could have been even more straightforward had the officials done their stuff properly. Already on a yellow card, how Martin Hinteregger avoided a second yellow in the penalty incident is a total puzzler. It was the big man’s birthday. Maybe that was it. A show of clemency.

In a sport as rugged as rugby, that’s a straight red card. A quick check with the television match official and the player would have been off and there wouldn’t have been a single person who’d have defended him.

It was a dismal failure by the officials, both on the field and in the VAR booth. The fact that it wasn’t picked up by any of them – and yet so many others saw it in real time on television – was a grim episode on an otherwise landmark night.

‘Stakes gargantuan for Clarke and players’

In the aftermath, Clarke was fantastically deadpan, as resolute in his refusal to give a quote that might be used as an illustration of euphoria as his defenders were in frustrating the life out of Austria’s attack.

The Scotland head coach had a minor pop at his team’s critics, saying some people don’t believe in them. That’s not wholly accurate. Plenty of people believe in their ability but those same people had become frustrated by the absence of consistent performances that reflected it. 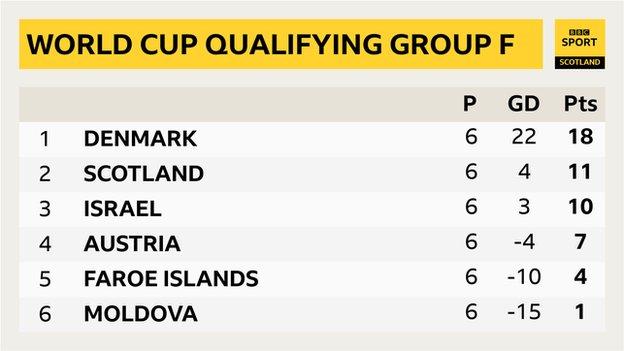 If he’s using that understandable angst as fuel to build a siege mentality among his players, great. Whatever gets the job done. Tuesday was a massive night for all of them. They backed up their fighting talk. They looked like a team that believed in itself.

Having delivered that victory they now need to take advantage of their good work by delivering another against Israel next month.

The stakes are gargantuan at this point. Grant Hanley, suspended, will be a miss next time out. He’s such a forceful individual at the back and he’ll take some replacing.

A home win against Israel, though, and that play-off place can be secured with two more victories, away to the Faroes and Moldova. They could have second place wrapped up before the Danes arrive in Glasgow for the final game.

It never works out like that for Scotland, of course. Past history tells us that there’s a twist and a turn left in this, that turbulence is coming. Don’t know where, don’t know when, but it’s coming.

Maybe. But in the here and now this group has turned on its head since Saturday. Hope lives.