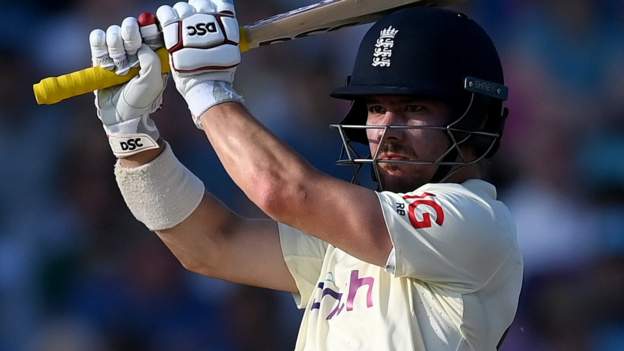 England made a promising start to their pursuit of a record 368, to leave the fourth Test against India primed for a thrilling conclusion at The Oval.

Faced with what would be England’s highest successful chase in Test cricket, Haseeb Hameed and Rory Burns took the home side to 77-0 at the close on day four.

When England took three wickets for 16 runs in the morning session, including India captain Virat Kohli for 44, Joe Root’s side had the opportunity to minimise their target.

However, Shardul Thakur batted patiently for 60 and Rishabh Pant was similarly careful in his 50 as they shared a seventh-wicket partnership of 100.

On a placid pitch, the tourists were eventually bowled out for 466 in their second innings.

History is against England – only nine times in the history of the game have more runs been chased by any side to win a Test.

Yet, all four results will be possible on Monday morning, as a wonderful series that is level at 1-1 continues to deliver.

Oops you can’t see this activity!

To enjoy Newsround at its best you will need to have JavaScript turned on.

This Test has confounded expectations at every turn and another fluctuating day in perfect late-summer sunshine has set up a grandstand finale.

Realistically, India remain favourites, with England’s next-best hope being the draw. However, optimism inside the The Oval was raised by the way Hameed and Burns played on a pitch that only seems to be getting better for batting.

England also have the inspiration of Ben Stokes’ Headingley heroics fresh in the memory.

India, and particularly captain Kohli, will be under pressure to close out the win, especially after again omitting masterful off-spinner Ravichandran Ashwin.

The Oval is sold out for the final day. The match is deliciously poised. It could turn out to be a classic.

Pant and Thakur pull India away

From 270-3 overnight, India’s most likely hope of batting England out of the game seemed to be Kohli.

However, when he edged Moeen to slip soon after, and with both Ravindra Jadeja and Ajinkya Rahane pinned lbw by Chris Woakes, the tourists were 213 ahead with only four wickets in hand.

Pant’s cavalier attitude had brought little prior success in this series, while Thakur hit the fastest ever Test half-century in this country in the first innings, yet they both curbed their natural instincts to calmly stretch India’s advantage.

Pant did not hit his first boundary until the 54th ball he faced. Only when Moeen wasted a run-out chance with both men in the middle of the pitch when Pant was on 37 did India opt to attack.

Thakur hit Ollie Robinson over long-on for six and reached 50 for the second time before he edged Root’s off-spin to slip.

Pant’s 105-ball half-century was his slowest in Tests and he was furious with himself when he drove a return catch back to Moeen.

Infuriatingly for England, Umesh Yadav swung his way to 25 and Jasprit Bumrah again frustrated them with 24 to prolong the toil and increase the target.